skip to main | skip to sidebar

Many people all over the globe have had the opportunity to enjoy the major motion picture production of C.S. Lewis's The Lion the Witch and the Wardrobe. This, along with all seven of the Chronicles of Narnia stories have been very near and dear to my heart ever since I was a child. In fact, my father was the one who introduced them to my sisters and me. A few years ago when I heard that a movie was being made I was so excited and anxious to see someone else's interpretation of the stories. Little did I know how profoundly some of the scenes would impact me. Near the end of the story Peter and Edmund are deep in the middle of a vicious battle between the good and evil creatures of Narnia. The White Witch and her army have all but defeated the creatures who fight for Aslan and the Sons of Adam. From a distance Edmund observes in horror as the witch makes her way towards Peter with her killing wand in hand that turns creatures into stone. He intervenes by stopping her and breaking the wand in half with his sword. With pure hatred she then stabs him with the broken weapon and he falls to the ground mortally wounded. What happened next has stuck in my mind forever. The look on Peter's face as he sees his brother fall hit the deepest recesses of my heart. Without hesitation he forgets all about what is going on around him and makes a beeline for the witch; to, in a sense, avenge his brother even if it meant death for the both of them.

I myself do not have brothers. But I do have three younger sisters who are dear and special to me in a way that no one else can be. Throughout our lives we have all had our highs and lows. I have seen their triumphs and defeats, laughed through every silly moment and cried from the heartaches. Though they have never been mortally threatened (as far as I know) their faces immediately raced through my mind when this scene occured. After watching the movie again I saw my each of my sisters as Edmund. It hit me like a ton of bricks. Tears came to my eyes as I wondered how I would react if I saw something or someone threaten their lives. I imagine it would not be unlike what happened on screen. All I could think about was how much I love them and care for them. Like in the story, I am a bossy person like the character of Peter. They even honored me with the nickname Little Miss Bossy. I think it's a God given right for oldest children! That has been a stumbling block in the past when my sisters had no interest in what I thought or wanted. But through it all I have truly loved them and would gladly risk my life to save theirs. The look on Peter's face after Lucy's cordial has healed Edmund describes my feelings perfectly. With tears in his eyes, he gathered Edmund in his arms and held him close. I love my sisters with a love that I think only siblings can understand. And I would do anything for them.

Practically Perfect in Every Way

Angela Danae Ogren
Queen of Narnia who aspires to have the charm and appeal of Mary Poppins and the wisdom and knowledge of a fully devoted follower of Christ. Lover of music and babies and practically perfect in every way!

Jump into a chalk picture! 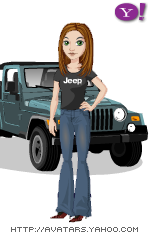